For the last two days, People have been posting Q Anon messages that seem to indicate that this coming week could be damaging to the Deep State. To me, it makes sense because President Trump’s Executive Order of December 21st declared a national emergency, thus putting the US military at his disposal for 60 days, which end on Monday, February 19th, 2018. This coming week is the last full week of the national emergency.

This morning, this appeared in my newsfeed (Thanks, M!): 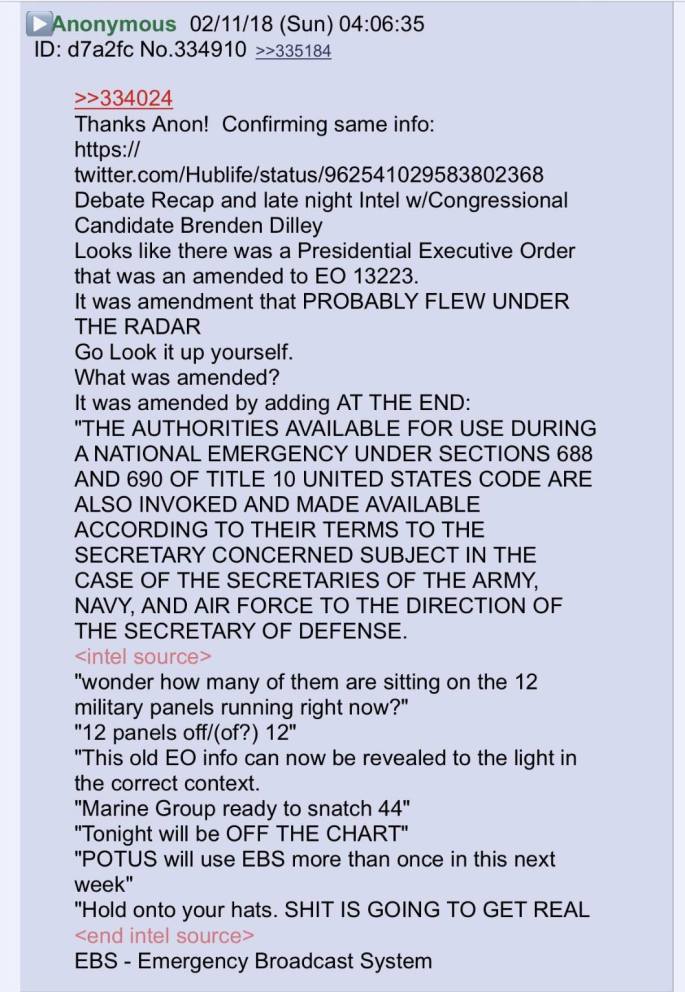 In a nutshell, it seems to indicate that the marines will be taking the 44th President of the United States into custody, tonight, and that the Emergency Broadcast System (EBS) will be used, similar to the Hawaii missile alert, last month.

Stay alert. This week could be very exciting!

Dr. Michael Salla wrote an excellent compilation of recent QAnon / 4chan / 8chan communications, analysis by Dr. Jerome Corsi, and writings from Ben Fulford, all related to the take-down of the Deep State.

As someone who began his trip down the rabbit hole with David Wilcock, Drake, and Cobra, back in 2012, I remain somewhat skeptical of all of this. However, the number of dots being connected and personalities involved leave me open to the information being presented. I mean, what should we look for when the take-down of the Deep State happens? If it looked like a movie, we probably wouldn’t believe it.

All in all, Dr. Salla ties many threads together to better understand the “weirdness” of many recent events and the QAnon phenomenon. – Ed. 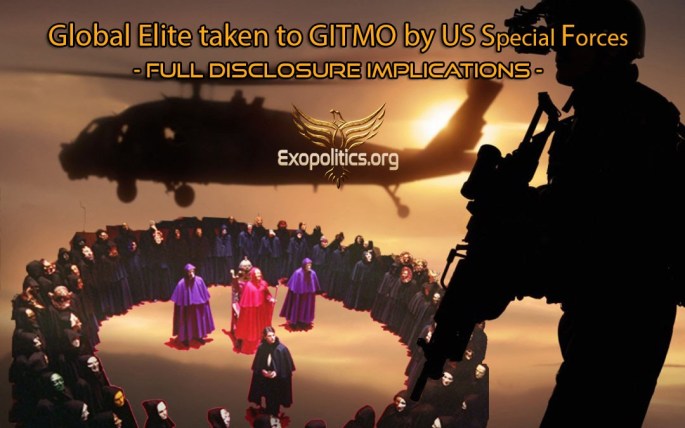 The internet has been buzzing with rumors that high level VIP members of the Deep State (aka Cabal/Illuminati/Global Elite) are being detained for human rights abuses and corruption, and are being taken by U.S. Special Forces to military prison at Guantanamo Bay Naval Base (Gitmo) as a result of thousands of sealed indictments. Multiple sources have been reporting on some of the key VIP figures taken there.

While these are still only rumors, recent events point to their plausibility. If accurate, these secret investigations, arrests and extractions to Gitmo where they face extended detention and military justice has enormous political implications, and makes possible the release of suppressed information previously withheld by the Deep State.

Thank you for your support. 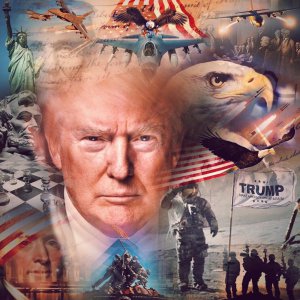 The weaponization of US intelligence agencies under Obama is about to be exposed. The Inspector General of the Department of Justice is set to deliver about 1.2 million documents to the Senate Judiciary Committee by January 15, 2018. Other investigations are heating up as beads of sweat form on the foreheads of the globalists.

Please help us keep the lights on – Support us on Patreon: https://www.patreon.com/hagmannreport

It looks like something could be happening VERY SOON.
If the second message (from 8chan) is accurate, it could be a matter of hours . . . 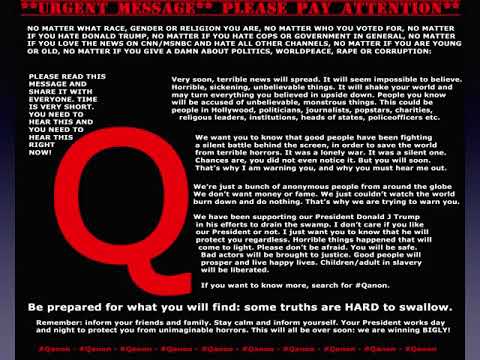 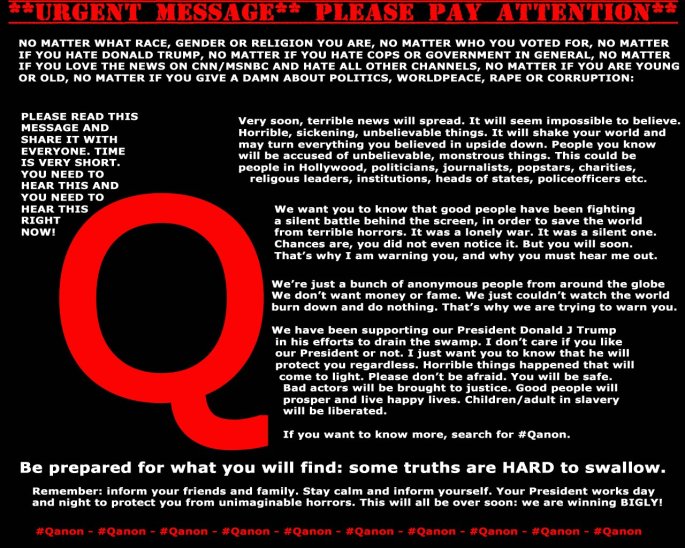 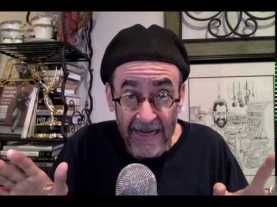 Lionel explains the Q Anon phenomenon that has taken the Internet by storm on 4chan and 8chan. 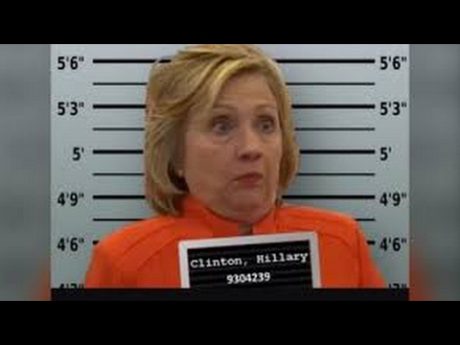 When Donald Trump gets hit, he always hits back even harder.  So when the deep state decided to conduct a legal witch hunt against President Trump and his family, they should have expected that Trump would return the favor.  In recent days, there have been all sorts of rumblings about sealed indictments, pending arrests and a “deep state takedown”.  Many believe that we are on the verge of seeing some of the most prominent Democrats in the entire nation being arrested and thrown in prison.  We shall see how all of this plays out, but in this article I am going to focus on the things that have been confirmed so far.

First of all, let’s talk about the documents that are going to be released on Friday.  According to Judicial Watch President Tom Fitton, the State Department is scheduled to release 2,800 government documents which were found on Anthony Weiner’s laptop…

Remember, this is just a portion of the documents that were found on his laptop, and the really juicy stuff is almost certainly not going to be found in these government docs.

Continues . . . Deep State Takedown In Progress: Is Trump About To Start Arresting Top Democrats And Bringing Them To Justice?

Ed: You may wonder if The Force is rising or Hell froze over, but this is 65 of 198 people Trump wants in his administration.

Video Description
Robert David Steele is the Chief Enabling Officer (CeO) of Earth Intelligence Network and is devoted to teaching holistic analytics, and open source everything engineering. He is a former CIA clandestine services officer and was the second highest ranking civilian in US Marine Intelligence. He is nominated for the Nobel Peace Prize for the 2017 cycle for his work into open source intelligence.

In this interview we discuss in #Unrig campaign to push for electoral reform, how Donald Trump can work to defeat the Deep State, and the potential humanity could have once suppressed and hidden technologies are released.

Robert can be found on his personal website and his public intelligence blog:
http://robertdavidsteele.com/
https://phibetaiota.net/