Press Secretary Sarah Sanders was not only chased out of the Red Hen restaurant, the owner Stephanie Wilkinson followed the family across the street to another restaurant to harass them.

This was reported by the press secretary’s father, former Governor Mike Huckabee on Laura Ingraham’s radio show this morning.

The rest of their family went to dine across the street.

The owner was actually tormenting Sarah’s in-laws, most of whom are liberals and leftists.

One of Sarah’s left-wing relatives went out and told the owner and her fascist group he was on the left and disliked Trump but she was embarrassing him and hurting the cause.

Sarah Sanders has a civil rights action against the Red Hen restaurant.

The left has been reduced to Banana Republic tactics thanks to the far-left Democrats. Bill O’Reilly calls it “virtue fascism” and it is fascism. The leftists pretend they own “morals” and they know what is “morally” correct. They do not. They are bullies shutting down opposing opinions. It is not virtuous to let foreign parents send their children up to enter the US illegally with cartels. The little girls have Plan B and birth control with them for when they are raped. It is a long and dangerous journey. That is not “moral”.

And, we are not a democracy, we are a Constitutional Republic.

There were other issues rationally discussed on the show you might want to hear.

This restaurateur of The Red Hen Stephanie Wilkinson not only told @PressSec Sanders to leave–acc to @GovMikeHuckabee on my radio show today, she FOLLOWED Sanders' family across the street to harass them at the other restaurant they went to! https://t.co/DEo2QOAcTY 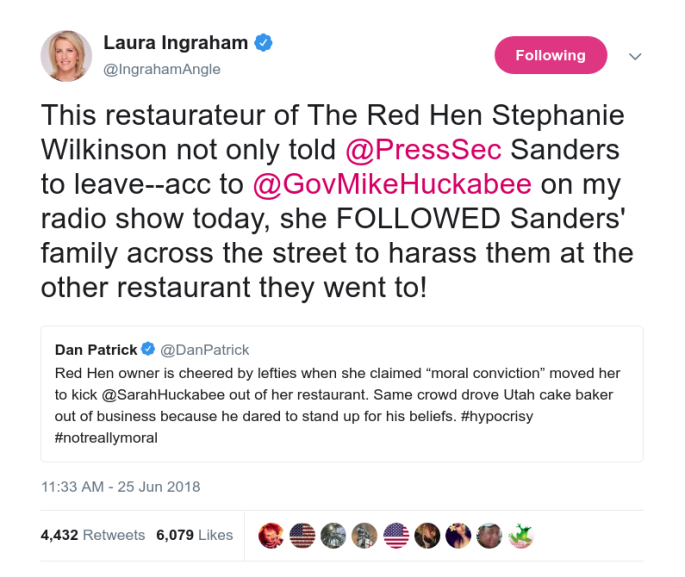 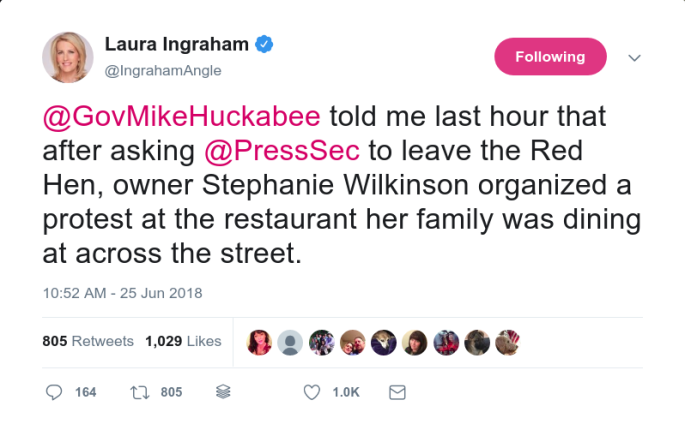 Sean Hannity and Laura Ingraham respond to reports or anti-Trump protests, following Trump’s victory in the US presidential election.